This weekend I was glad to arrive at the cottage in the dark: I wasn’t prepared to see the cottage without that charming chimney. It was one of the things that made me fall in love with the look of the place. And now … it’s gone. One of our first projects when we bought the cottage was to replace the wood stove with a propane fireplace. I know … Sacrilege! And then there’s this thing about safety … Anyway, we made the change and the chimney was blocked off. Since we started keeping the cottage open longer we had the heat on long after snow covered the roof. The trouble is, heat was escaping the little cove and the melt was getting in under the chimney flashing.

Well, you don’t have to repair drywall often to come to the realization that it’s time for an unused chimney to come down.

So, since we were having the shingles replaced this year anyway, it seemed like a good time to level that part of the roof and remove our risk of more water damage. All logic aside, I dreaded the thought of the cottage without that pretty chimney. What can possibly say cozy/storybook cottage more than a stone chimney?

As it turned out, we arrived to see a new (level) roof and a tidy-ish stack of blocks by the woods. We ignored that stack until break time on Saturday afternoon. Brian had been working on the wood frame and I had been cleaning up the gardens. We met up on the deck for a break and a cold beverage. We chatted about our projects and then Brian addressed the elephant in the room (or in the woods I suppose):

“What are we going to do with those blocks?”

I could tell he was starting to itch just knowing the blocks were over there. Brian’s the guy who doesn’t like seeing stuff lying around the property, something had to be done! I still don’t know how he puts up with my “in progress” projects everywhere! So, we started examining our options. At first we tossed ideas from the comfort of our chairs, but it wasn’t long until we were wandering around, to and from the pile of blocks.

Retaining wall to level the chairs by the fire? That’s a lot of work!

Attractive, wishing well-ish, kind of stack in the forest? Seriously?!

I cannot tell you how much this idea excited me! I had been searching for years for a way to compost out there … but still … where? We wandered the back of the property looking for level-ish clearings. Behind the shed? Not enough room. Behind the Bunkie? That’s where Brian just built the wood frame … so … no. We aimed ourselves back toward the pile, like we’d given up on the compost idea. Until …. There it was. A level, semi clear patch in the woods not far from the kitchen door, and the view blocked from the front of the cottage by a few hemlocks. TA-DA!

Quickly we determined which trees to trim for clear access and defined the area we’d use. I cleared the area quickly, before we could change our minds! We laid the blocks out beside the stack to get a plan of what we’d be doing in the forest. And then came the lifting and lugging. Thank goodness the mosquitoes have abated for the season or laying the stones in the forest would have been torturous.

The new compost enclosure is born! 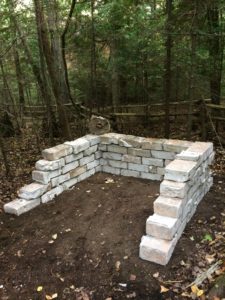 Rather than cleaning all the mortar off the blocks, we took advantage of the gaps it created for airflow. It’s not perfect, but it kind of is.

Believe me, after all the gardening and building, we were pretty still and quiet Saturday evening! Who needs a gym when you’ve got projects like this around?!

I finished it off with a layer of leaf litter and made the first deposit of apple peels and coffee grounds on Sunday morning.

Am I concerned about animals?

Oddly, other than scaring a skunk, I’m not concerned about animals digging in the compost. I mean, if they want to eat the peels have at it … at least they’re not ending up in the landfill doing no good at all.

We’ll let you know how this turns out! If it turns out to be a horrible experience, we might be asking for new ideas on what to do with the blocks..haha.

Summer is a perfect season to relax and enjoy doing nothing in particular for hours. It's so much easier to just sit when you have a good book in your hand - or in your ear (in audiobook format)...

Even though my dad is no longer around for me to spoil on Father's day, I have some great ideas for things I'd do or give to him. Fortunately, I still have lots of dads and dad-like guys in my life...